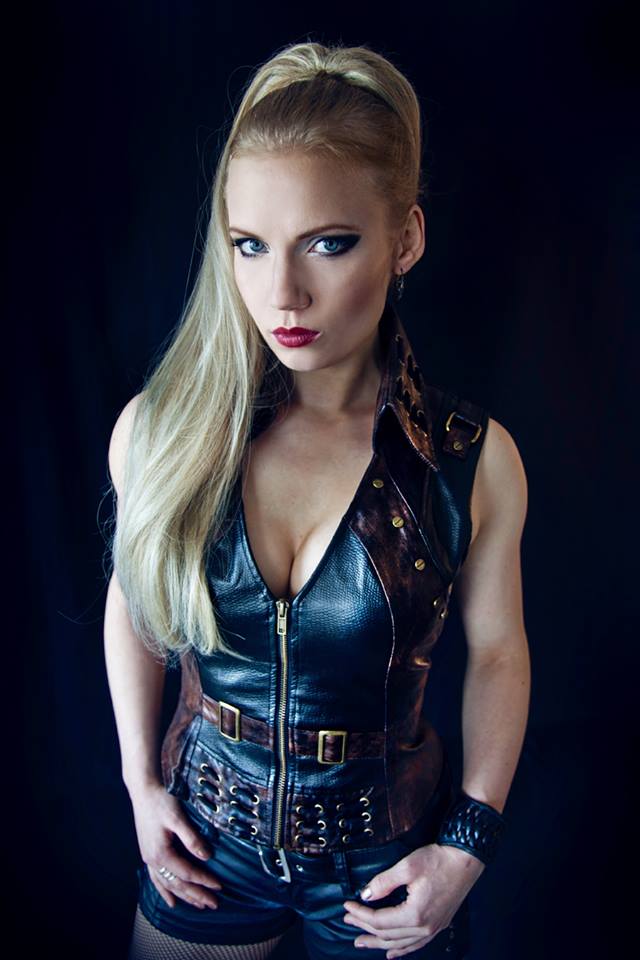 1. What is your Musical background? What does music mean to you as an artist?

My musical background is very much tied to my family since they’re all classical musicians. My parents teach at the Sibelius-Academy in Helsinki and my brother works as a professor in Munich. Actually most of my other relatives are musicians too so I guess it really runs in the family. So there was a lot of singing, playing and listening to music when I grew up. I begged my parents to start violin lessons and even built my own violin out of a piece of wood and rubber bands. I played the violin for seven years and also learnt to play piano on my own, but somehow singing was always the thing I loved the most. I really got into rock and metal when I moved to London back in 2008 and after some hard times in my personal life I felt compelled to write music to get those emotions out! I had a few songs done when I decided to start my own band Angel Nation (EnkeliNation) in late 2011. We played at the same festival with Leaves’ Eyes (Dames of Darkness) in May 2015 and then again we supported Leaves‘ Eyes at the O2 Islington in November. I think it’s amazing how much emotions music can awaken in people, how it can change your mood and bring back memories. It’s the perfect way of expressing myself as an artist and sometimes writing songs is almost like therapy that helps you through hard times. Compared to other instruments I’ve played, singing is definitely the most personal for me as I’m actually the instrument and I get to express everything through my own voice and of course lyrics. The whole world of music wether it’s classical or other styles is a hard world to be in and it takes a lot of dedication and faith sometimes to go on. For me it’s about the passion for music and performing and also a lot of hard work during these past ten years!

2. What can you tell us about your musical education?

I started taking singing lessons at 17 and got in Metropolia Helsinki two years later. I studied a classical degree there which also included a lot of teaching. After graduating I wanted to try out other singing styles especially because I always loved writing songs. I looked into musical theatre but finally decided to go to study in London. It was a year long course that went through different styles and included a lot of performing. I still remember starting the first module and it was Rock&Soul….vocally one of the biggest challenges but I absolutely loved performing rock and ever since really got into rock and metal music.

3. Now a new era for you has begun, you became the front singer of Leaves‘ Eyes. A lot of things were happening already: You made a videoclip, playing big festivals & touring in Europe and Asia. In autumn you will go on North America tour with Leaves‘ Eyes, a new EP is coming out! Sounds very exciting! Can you tell us more about it and how did the fans react at the live shows?

Yes, it’s been a real whirlwind during these few months! The first show in Indonesia was pretty surreal, with a tropical thunder storm, thousands of people and of course singing the songs for the first time! It was definitely one to remember and I really enjoyed that trip! After that we had some smaller club shows over the Europe which gave me the opportunity to meet more people, both new and familiar faces. I was very overwhelmed and grateful for the positive reaction I got from people at the shows. My personal highlight was this small and totally packed venue in Belgium. It was one of the hottest shows I’ve ever done, it was literally like a sauna on stage but the audience was amazing and the atmosphere made the night just great!
North America tour will be a real adventure and also a challenge for me. It will be my first very long tour so I can’t wait! I’m looking forward to playing our new single live there as well!

4. Which Leaves‘ Eyes song is your personal fave? And which song you like to perform the most?

There’s a lot of songs that are great in their own way but If I would play a song on my iPod I would probably choose “Take the Devil in Me” or “Sacred Vow”. I love performing “Edge Of Steel” and “Swords In Rock” is also a fun one to play live!

5. What can you tell us about the new song „Fires in the North“? How was the recording session at Mastersound Studio?

It has a nice rock vibe to it but it’s also pretty epic with big choirs and has some very nice melodies. Recording was great, had a lot of fun actually and everything was completed without any problems. Recording has never been my favorite thing – I prefer singing live – and I need to feel very comfortable to be able to do my best. But recording with Tosso and Alex has been super easy! The new Leaves‘ Eyes EP „Fires in the North“ will be out October 7 via AFM Records!