Maite & John had the chance to meet Leaves’ Eyes in the last Metal Female Voices Fest, in Belgium, where Maite was supporting her friends, the symphonic metal band “Diabulus in Musica” on stage. Phil, the organizer of the festival introduced Liv to Maite and after the concert John exchanged CDs with Alex. The mutual reaction was so positive about each other that just one month later Maite was already recording a duet with Liv; the song “Meredead”, which gives the name to the new LEAVES’ EYES album. With a strong and epic thematic, its special melody sung in ancient English bring us to the nordic seas where many brave seamen lost their lives. The angelique voice of Liv in contrast with the lyric soprano voice of Maite, blending and mixing with each other like waves, are like heads and tales of a same siren being, like the one that welcomes us into an ancient grave-sea, in the cover of the album. The Viking and Basque alliance just begun!
And this is not the only collaboration Leaves’ Eyes / Elfenthal on the “Meredead” album: The song “Étaín” exposes even with more strength Liv and Maite’s voices, that invoking the gods, tell us a Celtic story of love, sorcery and revenge. Strong tombs take us to the Celtic lands while both singers show their range.
The Irish gentleman touch comes in “Tell Tale Eyes”, where John and Liv join their voices in a warm octaves unison. Maite is also present in this song as an instrumentalist, as the baroque guitar of the intro is played by her. Wonderful song with a great melody and deep lyrics meaning. Both singers, John and Liv, put a lot of emotion into a song that like a wheel grows and grows till the shivers reach your back.

The Viking-Basque-Celtic connection formed in this album will continue in the next symphonic-rock album of Elfenthal, where Liv is expected to join, as well as other music colleagues of Elfenthal.

Just some days ago both bands met in Stuttgart at Mastersound Studio and listened together to the final mix of the tracks. Maite:”It was a very pleasant meeting, where we could discover even more the beautiful souls behind Liv and Alex. Thank you for the chocolate, the indian evening, the cake evening and everything else!” 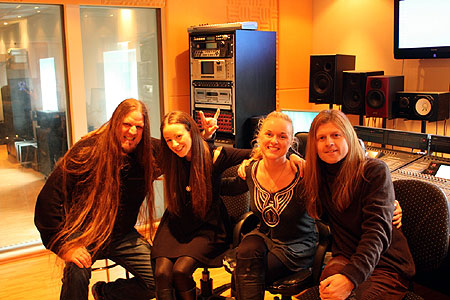