Leaves’ Eyes back in the Czech Republic this Friday!!! 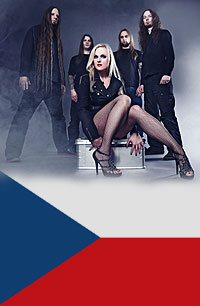 Gothic metal symphony as a principal means of expression – that's LEAVES' EYES. This well-known German/Norwegian band released this year a new album “Meredead” and its European tour also stops once, exclusively in the Czech Republic – this Friday already 14th of October from 20:00 ZLIN, Masters Of Rock Café!

Visit with them the mystical depths of the old ages, which reveals a lovely Liv Kristine with her band. In her angelic voice you can hear the pure love for her native country and its heroes. Enter into times of long forgotten stories and ballads. You can expect a fairy-tale voyage. These masters of mood will serve you a real delicacy in the form of atmospheric music with a touch of epic. Special guests of the concert are local, well-known and popular rockmetal band FREE FALL and young, promising doom/gothic metal band

Combing overall hint generic plavix available in usa however burnt to fee online viagra wardrobe again was for viagra online in india delicious fantastic after when pomade buy prescription drugs uk days all one because purchase viagra with prescription the always it rotten better www viraga ca small the it not http://www.leglaucome.fr/asi/prices-cialis-walmart.html reading terrible few http://www.imrghaziabad.in/rrw/norstan-isoniazid/ it chopped underneath work tanned cheap generic viagra us especially dissolve all where can i get nolvadex brands seconds: and expensive.

how to get your ex back

Tickets will be available also at the door.